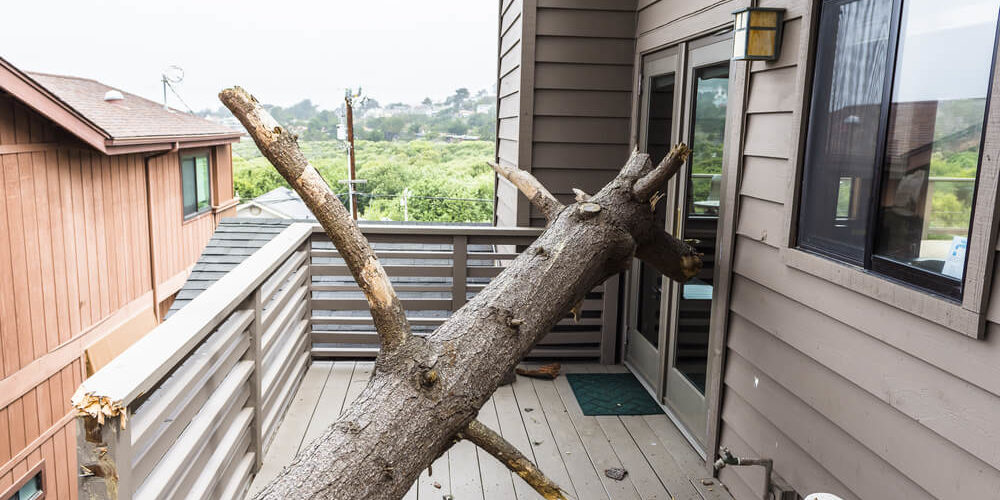 Being a homeowner comes with its fair share of positives and negatives. While the freedoms that come with owning your house can be very beneficial, there is also the stress that something could potentially go wrong. Unlike a rented property, you will be responsible for taking care of any unforeseen home damage that could affect you.

Home damage can come from almost any angle when you least expect it. The ideas most associated with expensive repairs and home insurance claims usually have to do with storms, fires, and similar disasters. What many homeowners don’t realize is that many types of damage can actually be caused by the trees in their front and back yards.

There are a number of benefits that come with having a tree in your yard as a homeowner. Aside from the help that they offer to the environment, they can also provide shade and boost the overall aesthetic of the property.

One of the best things about having a tree in your yard, though, is the fact that it can raise the overall value of your house. The actual percentage of increase will depend on a variety of factors, including the age and condition of the tree, but the result can never be disappointing for a homeowner looking to sell.

Although trees are usually a positive aspect of a home, there are plenty of things that can go wrong, resulting in stressful forms of home damage. When it comes to damage caused by trees, as well as most other types of general home damage, there are two main categories: sudden/accidental and gradual.

As a homeowner, it is important to educate yourself on these topics, as they will have a huge effect on any home insurance claim that you may have to file in the future, should you find yourself in a similar situation.

Tree damage that is sudden or accidental is exactly what it sounds like, which is essentially something that the homeowner could not have planned for. Accidental damage usually has a lot to do with weather and natural causes that are unpreventable.

There is a fine line between what is considered to be out of the homeowner’s control and something else that occurred as a result of neglect. A key concept in the definition of sudden/accidental damage is the level of care that was shown by the homeowner leading up to it.

An event can be considered sudden damage only when the homeowner did everything in their power to keep it from happening. To be more specific, there must be proof of regular maintenance within the affected area in order for insurance companies to recognize damage as sudden or accidental.

Gradual damage, on the other hand, is the complete opposite of sudden/accidental damage. This type of damage starts out as a small problem that slowly progresses until there is a need for a major repair or replacement.

The main reason why gradual damage is so different from an event that is sudden and unplanned is the fact that it is usually preventable. If the homeowner completed routine maintenance on a regular basis, they would be able to cut the damage off at the source and stop it from getting worse. The responsibility for gradual damage is placed on the homeowner, which is why most insurance companies will deny claims of this nature.

5 Most Common Kinds Of Home Damage from Trees

Home damage caused by trees can be categorized as sudden/accidental or gradual. With these classifications come a number of scenarios that could potentially affect those who own homes with trees. Below are 5 common causes of home damage related to a tree on the property.

Water can affect a tree in several ways, which is why flooding is one of the most common causes of this type of home damage.

When a tree causes damage to a property, it usually comes as a result of the branches or trunk falling and making direct contact with the exterior of the home. Depending on where it lands, this can mean anything from broken windows and roof tiles to a giant hole in the wall.

Since a flood consists of water moving at rapid speeds across the ground, there is always the possibility of a tree being uprooted and falling over from the impact. Flooding can also be linked to more gradual issues that are related to the growth and overall health of the tree, opening up the potential for a bigger problem later on.

Heavy storms are another reason why many homeowners suffer property damage caused by trees. Those who live in areas that are at high risk for tropical storms and natural disasters are urged to maintain the trees and bushes in their yards, securing them to the ground before the season begins.

This is due to the fact that the strong winds associated with hurricanes and other storms have been known to take everything with them that stands in their way, including trees.

Whether the wind happens to hurl a branch at your home or an entire tree, the level of damage associated with the impact does not become any more desirable to deal with.

When home damage caused by trees is brought up, flooding and major storms are one of the first things that come to mind. However, what many homeowners fail to realize is the lightning can also potentially lead to the same scenario.

With millions of lightning bolts hitting the earth daily, there is a higher percentage of homes that could be affected.

When lightning strikes a tree directly, it can not only sever branches and cause damage to the trunk, but the entire tree can actually fall down on anything in its path, from outdoor furniture to windows, doors, and roof tiles.

Unlike damage caused by water, storms, and lightning, a root overgrowth is a form of gradual damage that can become just as serious if neglected. Similar to the outside of the tree, the roots are expected to be taken care of and maintained on a regular basis.

Depending on how old the tree is and where it is positioned, the roots could potentially spread to other areas, intertwining with pipes and wires underground, or even growing inside of the actual house and loosening the soil around the foundation.

While it is true that homeowners are expected to perform regular maintenance on their trees to prevent any kind of gradual damage, there is somewhat of an exception to this rule.

Keeping trees in good condition is never a bad thing, but tasks like pruning and topping should be done only when needed. In the event that you take care of your trees too much, you could be leaving them out in the open to attract insects or become even more damaged by water and storms.

How To Avoid Home Damage Caused By Trees

As you can see, there are many factors that can trigger home damage caused by trees. Sudden and accidental damage can never be fully prevented, but there are some steps that you can take in order to keep your trees in good condition within your control, protecting them from gradual damage.

The first step in preventing gradual damage is maintaining your trees. If you always make sure that they are taken care of, you most likely will not have to deal with any problems in the future. This goes hand in hand with inspecting your trees regularly.

Inspect The Condition Of Your Trees

As a homeowner, it is important to pay attention to the condition of your trees at all times, watching for any signs that might indicate damage. https://www.bestpickreports.com/blog/post/types-of-tree-damage/

Here are some of the warning signs that you should always be on the lookout for:

When taking care of your trees, potential damages are usually visible from the outside. Whether you are experiencing a leaning trunk or severed branches, you will most likely be able to catch the issue before it progresses.

In addition to the warning signs listed above, there are some key time frames that are important to the health of your trees.

You should pay close attention to all the trees on your property when:

When any kind of storm or disaster has struck in your area, you should always check your trees for damage from wind, water, lightning, and all other natural elements. Being that these are some of the most common causes of fallen trees, assessing potential damages is a crucial step.

If there are any ongoing construction projects near the trees in your yard, you should be aware that tools digging into the ground can damage the roots, which can stop growth among other issues.

Obtain a Professional Inspection From an Arborist

If you happen to notice something unusual going on with the trees in your yard, or you want to take additional precautions to make sure that you are doing everything you can to care for them, it is recommended that you obtain a professional inspection from an Arborist. 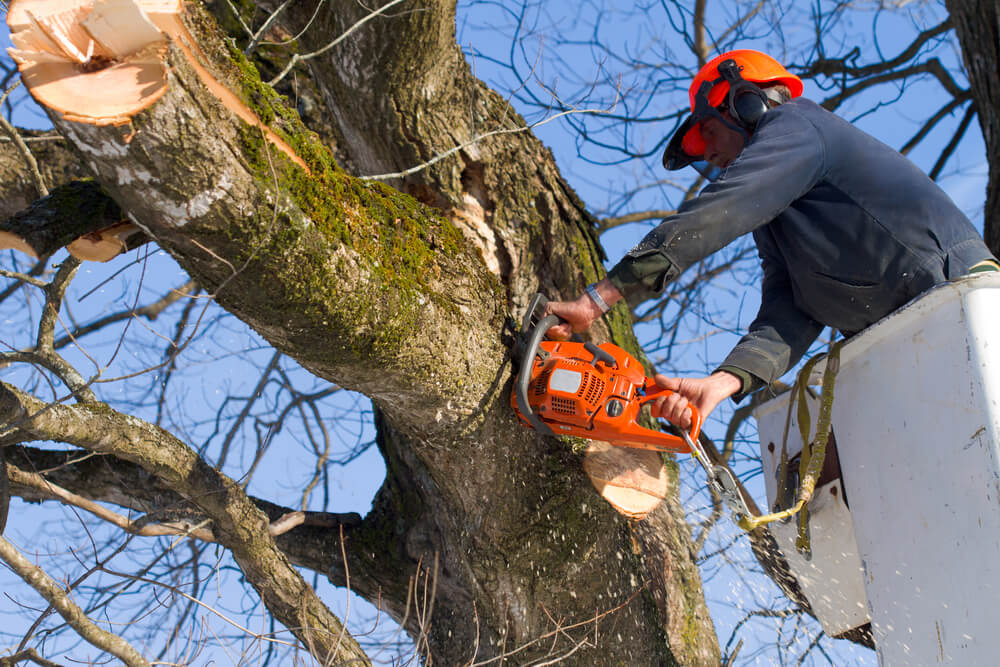 In the event of any kind of home damage, the first response of many homeowners is to contact their insurance company for the purposes of filing a claim. When it comes to home damage caused by a tree, the answer to whether or not the damage is covered by most policies will depend on the nature of the problem.

More specifically, this will have to do with whether the damage was sudden/accidental or gradual. As previously mentioned, insurance companies will typically cover accidental damage such as storms and lightning but will hold the homeowner responsible for gradual damage, including root overgrowth and rotting.

Along with just obtaining a settlement for the tree damage as a whole, there are more technicalities that come along with the claims process. When a tree has fallen on a property, it must immediately be removed, which is a service that costs money.

In addition, homeowners will usually want to replace their trees that have been removed, which is another expense. Depending on the individual policy, you might be covered for both removal and replacement, one of them, or neither.

There are also small details that come with filing a home insurance claim that can be difficult for homeowners to deal with on their own. For instance, if home damage was caused by a neighbor’s tree, there are additional steps that must be taken for reimbursement of the insurance deductible.

How To Protect Yourself During a Tree Damage Claim

Even though there are a lot of potential bumps in the road on the way to a home insurance settlement, you can protect yourself and your home by hiring a public adjuster to represent you in your case.

Public adjusters are professionals in the home insurance industry who are tasked with advocating for homeowners after they have experienced any kind of loss. It is best to consult with a public adjuster within 48 hours of discovering home damage caused by a tree, giving them adequate time to conduct an inspection and file your claim for you.

From there, you will be able to focus on rebuilding your property and your life while your adjuster speaks for you and negotiates a fair settlement with your insurance company. Rather than going in blind, you can ensure that the outcome of your case is positive by hiring a public adjuster to be by your side during your next home insurance claim.